John Devecka and Eric Berkowitz, two entrepreneurs from New York, were already doing well before they went on the show “The Shark Tank.” The two came up with the idea for the very popular Guitar Hero games, which have sold over $3 billion worth of copies around the world.

It all began with a Karaoke drumming game they made in the 1990s called Dreamscape. John built the first prototype in the garage of his parents.

He and his partner then applied for patents on their idea and were granted them. MTV Drumscape was the first video game ever to let you play the drums. It came out in 1999 and was an instant hit in arcades all over the world.

Singtrix Now in 2018 – The After Shark Tank Update

It’s likely that Eric and John didn’t really want to get a deal on the show when they went into the shark tank. Their high price and their unwillingness to negotiate for a more reasonable price made it almost certain that they wouldn’t get a deal, no matter how good their product was.

After the show, the two were interviewed and said that the show’s producers had found them at a trade show and asked them to be on it. They had turned down the offer to be on the show at first, but when they saw how helpful the producers were, they changed their minds the day before the deadline.

When the show first aired in October 2014, the Singtrix Twitter account retweeted comments from other users suggesting Eric and John never intended to make a deal on the show and had merely appeared to do so in order to gain some free publicity.

Future success for Singtrix could be as sweet as John’s singing when he’s using the Singtrix box, but only time will tell if Eric and John have another Guitar Hero on their hands. 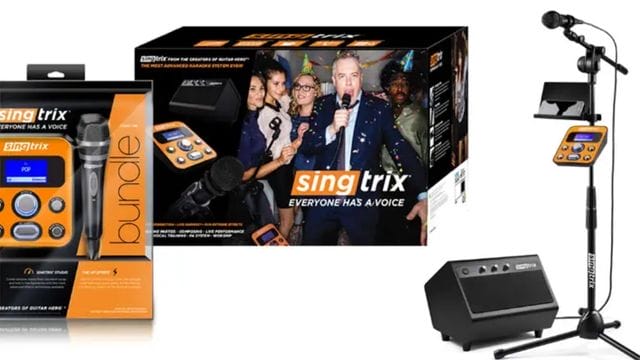 Devecka and Berkowitz met in college and collaborated on the creation of Dreamscape, an arcade drum game that they co-branded and licensed to MTV in 1997. In a simulated jam session, Drumscape allowed users to do their best Lars Ulrich impression. The underlying patented technology was the pot of gold, which they later sold to Activision for an undisclosed sum and used to create Guitar Hero in 2005.

“It was devastating to miss an entire holiday season—almost all of our sales happen around the holidays,” says Berkowitz. He claims they chose to avoid discussing the details with Amazon and other retailers, instead simply stating that the Singtrix had “sold out” for the season.

When the factory reopened at the end of 2017, it was able to ship a few thousand units, which Singtrix sold in early 2018. According to Devecka, the year didn’t start off well: the factory closed again for Chinese New Year’s celebrations, and discussions to restart production moved slowly after that.

Devecka says that in May, as Singtrix’s team was getting ready for the holidays, they got another surprise: the facility was closing to rebuild and modernize.

It wouldn’t reopen until the end of the summer, giving the startup little time to meet its holiday goals—again. Devecka recalls that Singtrix was offered the use of a third-party factory, but it would cost about 40% more and require a 50% down payment.

Berkowitz claims he had to return to retailers to apologize and explain that another holiday shipment would be missed. “We spent the majority of our time fielding emails from people wanting to buy and asking us what was going on,” he says.

“You don’t have any genuine responses for people.” One such retailer, New York-based B&H Photo, was informed that Singtrix was once again sold out. According to Inc., B&H’s 2017 holiday orders went unfulfilled, and the company hasn’t received any new Singtrix units since.

As Devecka and Berkowitz desperately sought a new manufacturing partner, they noticed savvy re-sellers selling used Singtrix machines for up to four times the retail price on eBay and Amazon. Berkowitz and Devecka say they were relieved to see continued demand for the Singtrix, but they were also angry.

They had developed a popular product for which consumers were willing to pay top dollar, but they were not reaping the benefits. They claim that the company was struggling to stay afloat.

“We were never going to close the company,” Berkowitz says, but times have been difficult. He and Devecka have not taken a salary in over a year.

According to Devecka, the only reason Singtrix has been able to survive is that the company has low overhead costs—its five-person team works remotely.

“Even if we had to find other ways to make a living, this company would not die,” Berkowitz adds. “Singtrix is a rockstar, and it will outperform us no matter what.”

Calling in a Lifeline

Berkowitz and Devecka realized they needed funding to rebuild their company last fall. They decided to seek help from Singtrix’s fans. Their Indiegogo campaign, which began on March 20, has already raised nearly $200,000 from crowd funders eager to own a new version of Singtrix’s karaoke machine for less than $300.

The campaign makes no mention of the co-founders’ ordeal; according to a company timeline, the device simply sold out in 2017 and again in early 2018. In addition, Singtrix informs crowd funders that it has found a new “high capacity” manufacturing partner in China.

According to Devecka, he has been calling retailers about the karaoke machine’s resurgence. He claims that one of the company’s former European retailers has already requested a year’s worth of purchase orders, but he does not elaborate. 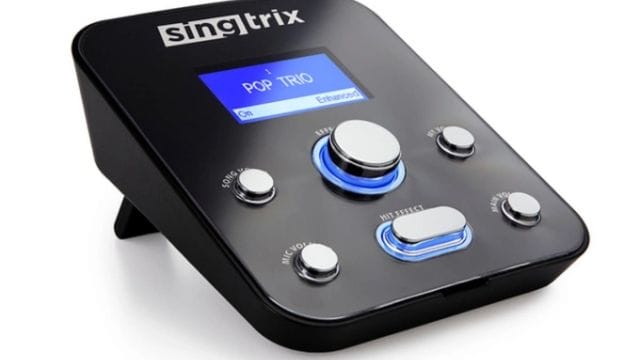 Berkowitz and Devecka, on the other hand, have stated that they will keep their product off store shelves—including their own website—until Indiegogo backers receive their units later this summer. In addition, they have pledged to donate $5 from each order to VH1’s Save the Music Foundation.

This time, the co-founders are taking a different approach. They’re foregoing a distributor in favor of a more hands-on relationship with their manufacturer. A trip to China is planned for April, and they’re also buying “extra insurance for the things you couldn’t even imagine could happen,” according to Devecka.

Berkowitz admits that it will be difficult. After all, the company still employs only five people, including the two co-founders.

And the Singtrix isn’t the only upgraded karaoke machine on the market: Singing Machine Studio, for example, includes auto-tuning technology to improve vocals. Nonetheless, Berkowitz is optimistic.

“This is the most promising future I’ve seen for the company since its inception,” says Berkowitz. “It truly is. This is the moment.”

When John and Eric went on the show, they said that their Singtrix business could be worth so much that they wanted $1.5 million for just 5% of it, which would put the company’s value at a whopping $30 million.

John started his pitch by saying that Singtrix was the most exciting and innovative way to sing that had ever been made. It could make anyone a great singer, he said.

Eric explained that they had to find a really bad singer so they could test how well their product worked. They were lucky that John fit the bill perfectly. He sang a few lines to show the sharks that he had no musical talent at all, and his lack of talent was clear for everyone to hear.

Eric said that John would sing again, but this time the signal would go through the Singtrix unit. The Singtrix would fix his off-key tone, keep him in tune, and add a live harmony to his voice. Eric tried to get the sharks to clap along with his partner, but the sharks were not in the mood to party.

Mark Cuban said, “We’re focusing,” and Eric was left to awkwardly clap by himself.

When John started singing again, it was like hearing a choir. His voice wasn’t very harmonious, but the Singtrix unit did some electronic magic to it, and now he can sing as sweetly as any bird in the sky.

It was clear that the sound was changed electronically, but no voice coach on the planet could have helped John improve his voice to that level.

How Much is Singtrix Worth?

How Much Money Has Singtrix Made?

Is Singtrix Still in Business?

With the factory closed and no idea, if their proprietary parts had been spared, Devecka says the team decided to cancel all orders and put the brakes on marketing. Singtrix planned to sell at least 37,000 units in 2017, but it shipped only 20,000, according to the company.