For as long as it’s been on the air, ‘Rick and Morty have sought to outdo itself. One of the best examples of an animated series attempting something unique and off-the-rails is “Rick and Morty,” season 5, episode 2.

This episode, which follows Rick, Morty, and the rest of the family as they cope with decoy versions of themselves, is full of existentialism.

If you could not see the numerous developments or be utterly stumped by the episode’s conclusion, we are here to help you decipher episode 2 of ‘Rick and Morty season 5. Everything you need to know about the episode’s events and its baffling conclusion is right here.

Rick and Morty season 5 episode 2 premiered on Adult Swim on 27th June 2021. The last episode of this Season was aired on 5th September 2021. There was a total of 10 episodes in this Season. 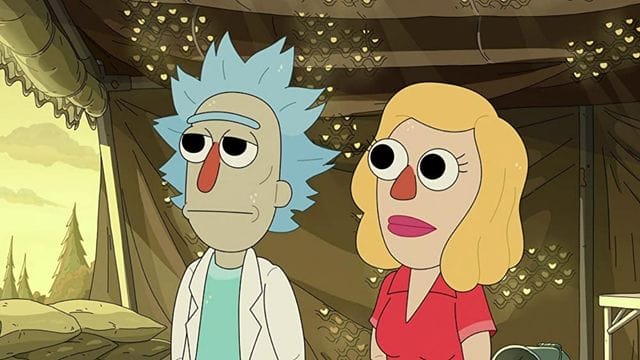 Rick and Morty have five seasons right now. This is only the beginning of the story. Rick and Morty were renewed for another 70 episodes in 2018. There will be 50 more episodes, or perhaps five more seasons, after the Season 5 finale.

“Mortyplicity,” the second episode of season 5 of “Rick and Morty,” starts with Rick and his family enjoying a typical family dinner. Jerry has a pattern of inconsistency in his actions, which Rick notices.
In no time, a squid-like extraterrestrial creature appears and slaughters the entire family.

We quickly cut to another Smith family residence, where Rick intervenes to prevent Summer and Morty from shooting Mr. Always. He receives a notice informing him of the death of the “decoy” family.

Towards the end of the episode, we learn that the numerous decoys have spawned even more decoys. Also, the squid-like aliens are on the prowl to capture them all.

When Rick and his family are ambushed by another decoy family dressed as squids, they understand that they are decoys attempting to murder the other decoy families. With little delay, the decoy combat expands to a massive scale.

While this is happening, multiple Beth decoys attempt to persuade Rick that Rick should not kill the baits. One family manages to flee the battle and is spared from an evil Rick by another decoy family, who also runs the conflict.

We hear that the decoys have allied to avert the conflict. Despite this, their base is assaulted, and the fight continues until only one family remains, the “true” family.

By the end of the episode, for a while, viewers realize that the family they’ve been seeing has never actually existed. Rick has been in deep space with the “real” family. They’ve reportedly come face-to-face with Beth’s clone, who has been spotted hanging out with the rest of the crew on Rick’s spaceship.

Although the episode “Mortyplicity” felt like a throwaway, Rick and Morty season 5 has a lot of potentials; in reality, what appears to be a tease for the upcoming episode feels more like a preview of what we could’ve seen earlier in the attack. Beth’s clone may occur again, even if she cautioned the family not to run across her regularly.

That being said, ‘Mortiplicity‘ may be one of the show’s best episodes in a long time. It’s a creative sci-fi plot that’s easy to understand and hilarious to watch play out, especially when we encounter more and more bizarre decoys – most notably a version of Rick, Morty, and the family built out of wood. The show is at its best when it combines the funny with the intelligent.

This episode of Rick and Morty shows that the show can find humor in the most unexpected places.
Highlander references and a remark about living in the woods “like libertarians” are featured in the episode.

The humor in this episode stands in stark contrast to the storyline and is both original and clever. Even if every episode of Rick and Morty attempted, it would be impossible to cover every facet of what makes the program so enjoyable. For other people, a half-hour of good laughs based on well-worn plot techniques may be enough.

My favorite 20 minutes of the show so far this year, yet everything I’ve described here is simply the tip of the iceberg when it comes to where the plot ultimately goes. The Jerry-themed post-credits sequence may be the funniest ever.

READ MORE: Norsemen Season 4: When Might Season 4 Be Release?

Will there be a season 6 of Rick and Morty?

Fortunately, season 6 of Rick and Morty is on its way. It was confirmed at an Adult Swim Festival panel in 2021 that the new Season would premiere sometime in 2022.

According to Rick, President Morty is the only person to have ever hacked his Portal Gun.

For the most part, however, the show’s increasing emphasis on serialized storytelling implies that we’re following the same characters. Even if “our” Rick and Morty were to die during the mock battle, a new but very similar version of these characters may be pulled from another dimension to continue the story.

And if it turns out that “our” Rick and Morty are no longer alive, the writers might still build on previous plot strands in an eternal reality. And who knows?  They might even be able to resurrect Mr. Poopybutthole’s cat.