Russian forces Ukraine invaded from three sides, while explosions rang out in a number of cities, including the capital, Kiev, in a widespread attack that began before dawn today, Thursday.

Here is a timeline of how and when this happened.

Putin announces the attack: Russian President Vladimir Putin gave a speech early Thursday morning, in which he said he had decided to “conduct a special military operation … to protect people who have been mistreated and exterminated by the Kiev regime for eight years,” repeating an unfounded claim about the Donbass region. Ukrainian separatist backed by Russia.

However, he denied that Russia was planning to occupy Ukrainian territory. We will not impose anything on anyone by force.”

But Putin added in a very serious paragraph that anyone trying to interfere with or threaten Russia would lead to “consequences that you have not experienced before in your history.”

Ukrainian President Volodymyr Zelensky responded several hours later with a minute-long speech of his own, saying he had spoken to US President Joe Biden and that the US was rallying international support for Ukraine.

“The West is with us,” he said, and declared martial law across the country.

Before dawn attack: The invasion began hours before dawn with a series of missile attacks on positions near Kiev, as well as the use of long-range artillery against the northeastern city of Kharkiv near the Russian border.

It soon spread to central and eastern Ukraine as Russian forces attacked the country from three sides. In the hours before daylight, people in the cities of Odessa, Dnipro, Mariupol and Kramatorsk reported huge explosions.

The immediate details of the victims were not clear. The Ukrainian Defense Ministry claimed that its forces did not suffer losses. 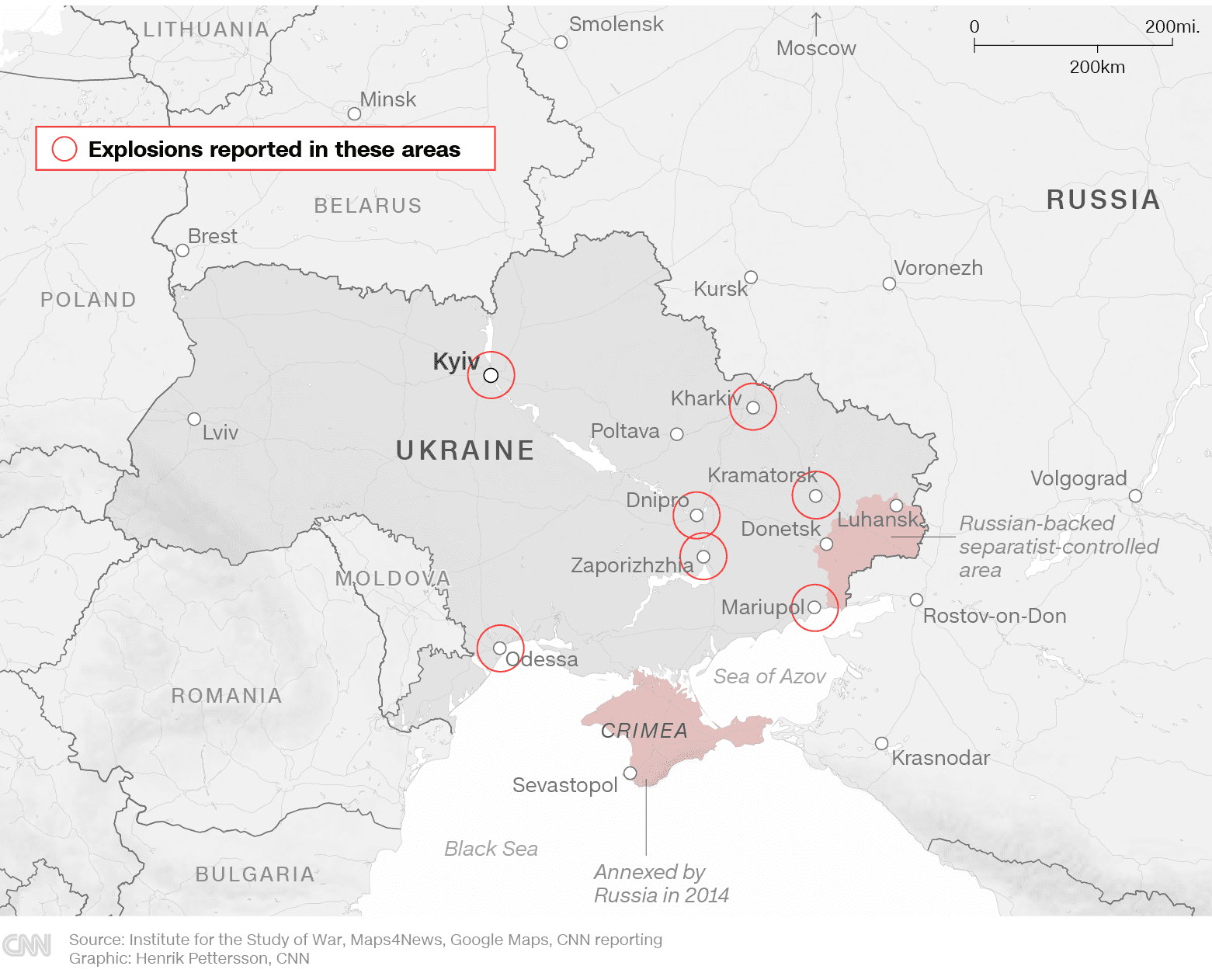 But it is clear that there has been significant damage in and around many cities. In Kharkiv, a video appeared of an apartment building damaged by a missile or long-range artillery. Another video showed a missile buried on a road. The State Emergency Service reported that six people were trapped under the rubble in the city of Nizin.

Ukraine’s Interior Ministry said ballistic missiles were used as part of the attack, while the sound of planes was heard over the central city of Zaporizhia.

The Russians used a wide range of weapons in their offensive, including attack aircraft, helicopters, tanks, long-range artillery, and missiles.

Dawn: After dawn, sirens sounded across Kiev as well as in the western city of Lviv. A short time later, one unidentified plane flew over the capital.

As the day began in Kiev, streams of vehicles were seen crossing the North Bridge heading west, away from the epicenter of the Russian attack. Other people in the capital have taken refuge in the subway.

All over the country long queues formed at gas stations and automated teller machines. A few people gathered in the streets of Kharkiv to pray.

Under a cloudy sky on Friday morning, Kiev seemed to be in a state of shock. The streets were quiet and schools were closed. Here and across the country, Ukrainians are just beginning to deal with a disastrous night and the prospect of a very uncertain future.

CNN teams across Ukraine and Russia contributed to this report.