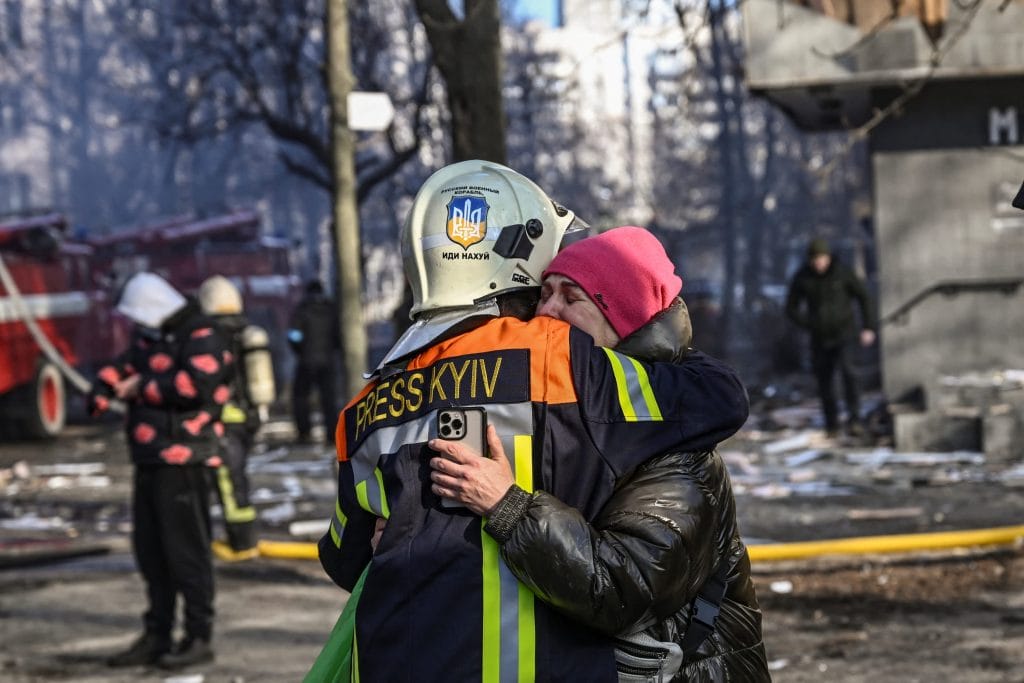 Ukrainian emergency services said a firefighter hugs a woman outside a destroyed apartment building in Kyiv on March 15, 2022, after strikes on residential areas killed at least two people, as Russian forces intensified their attacks on the Ukrainian capital.

With Russian forces bombarding towns, villages and cities across Ukraine, pressure is mounting on officials on both sides to come up with some sort of solution, putting an end to the destruction and bloodshed as soon as possible.

Previous attempts at talks seem to have made little progress, with the demands of both sides seemingly far apart, but there is room for compromise and signs that the discussions are heading in the right direction.

In his evening address on Monday, Ukrainian President Volodymyr Zelensky said the talks that day were “very good”. Russia, on the other hand, said the weekend’s discussions had made “significant progress”.

A fifth round of talks is scheduled for Tuesday, with the hope that the momentum for an agreement will continue.

Here is a brief guide to what each side wants:

What does Russia want?

One of the biggest questions posed by Russia’s invasion of Ukraine, which began in earnest on February 24, is what President Vladimir Putin wants — because it hasn’t been fully articulated.

Many close observers of the country have said that Putin’s overall goal is to restore Russia’s sphere of influence on former Soviet territory such as Ukraine, and to halt its slide toward the West.

In the short term, Putin is seen wanting to overthrow the pro-Western Ukrainian government and install a pro-Russian client leadership there in an attempt to bring Ukraine back into Russia’s orbit.

For its part, Russia has been clear in stating what it wants from talks with Ukraine:

It wants legal guarantees that Ukraine will never be allowed to join NATO, the western military alliance, and has since said it wants Ukraine to sign a neutrality pact and change its constitution to bolster that.

Delegates attend the third round of Russia-Ukrainian peace talks in Brest, Belarus on March 7, 2022.

What does Ukraine want?

Ukraine has demanded a ceasefire with Russia and the withdrawal of Russian forces and said it would not cede any of its territory to Russia. However, it is not clear whether this means that it will refuse to recognize the breakaway pro-Russian republics of the Donbass or Crimea as Russian territory.

Ukraine has also indicated that it may give up future NATO membership, saying it would be willing to give up membership if it received “security guarantees” from the United States and NATO, ensuring its safety and security, in addition to any agreement with Russia.

One of Ukraine’s immediate priorities has been to establish humanitarian corridors to allow the safe evacuation of civilians, some of whom have tried to remain under siege and unable to escape.

The southern port city of Mariupol has been a major concern for Ukraine in recent weeks. It is surrounded by Russian forces and is subjected to almost continuous bombardment, while food, water and electricity are scarce in the city and previous attempts to cease fire have failed.

There has been mixed success in creating humanitarian corridors in Ukraine, with some established but directed Ukrainians to Russia, or its ally Belarus, while others have been canceled amid reports of civilians being shot at trying to flee.

It is hoped that more civilians will be able to evacuate Mariupol on Tuesday, after a large number of civilians left on Monday.

Ukraine said it plans to send a convoy loaded with humanitarian supplies to the port city on Tuesday and hopes to get the women and children out of the city on its way back, Reuters reported.

More than 2,500 residents have been killed in Mariupol since the Russian invasion on February 24, according to a Ukrainian official on Monday citing Reuters, although the numbers are difficult to verify. Russia has said it does not target civilians despite evidence to the contrary, with hospitals and other public infrastructure being targeted.

How Much Does Shailene Woodley Have in the Bank?

How Much Ronda Rousey Earns in Year 2022?

How Much Robert Pattinson Have Net Worth in 2022?