Ronaldo senior agreed to terms with Al-Nassr on a two-and-a-half-year contract on New Year’s Eve, but he was unable to make his debut in the Middle East owing to a ban he earned during his final months at Manchester United.

After weeks of waiting, All-new Nassr’s superstar made his Saudi Pro League debut on Sunday, defeating Ettifaq 1-0  but the Portuguese forward’s eldest son has been hard at work since joining his Father in Saudia Arabia. 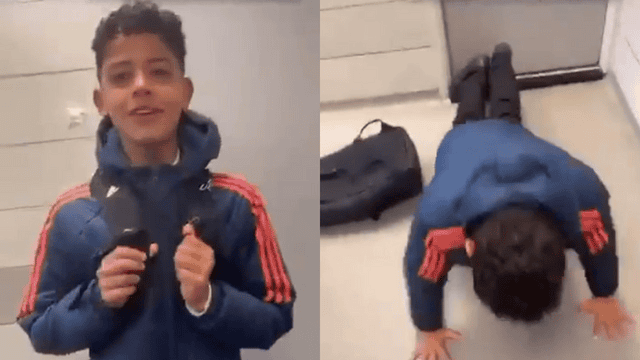 Senior Ronaldo revealed it casually in an interview with Egyptian television. CR7 used it as an example of how much his son admires him, as well as how to deal with The Haters.

On the one hand, it wouldn’t be entirely out of character for Ronaldo to embellish a narrative like this in order to sell himself to the media. However, children can be vicious, and it’s easy to imagine the younger Ronaldo’s peers chanting “Messi” at him at recess.

Since visiting Saudi Arabia with his father, Cristiano Ronaldo Jr. has put in a lot of effort. He is already training in the Middle East with academy students who are two years older than him.

While his father was working there, Cristiano Jr. was a member of the Manchester United academy; however, The Sun reports that the 12-year-old is currently training in Saudi Arabia.

The national sports complex of Saudi Arabia, the Mahd Academy, is where Cristiano Jr. is reportedly receiving training. The boy, who was reportedly training with kids two years older than him, may have gone back to Real Madrid to enroll in their academy.

Cristiano Jr. has garnered attention in Saudi Arabia, but on Sunday night, his father ascended the stage and made his official Al-Nassr bow. The Sun claims that Saudi Arabia’s national sports institute, the Mahd Academy, is where Cristiano Jr. receives his training. He plays with kids who are two years older than him due to his exceptional talent.

In a 1-0 victory over Ettifaq on Sunday, Ronaldo made his Al-Nassr debut, honoring his father. Ronaldo entertained the fans and helped his team win despite not scoring.