Is Caleb Lee Hutchinson still dating Maddie Poppe? Fans have inquired, but Maddie has yet to respond.
In 2018, the couple met while competing on American Idol. Maddie won the season, with Caleb coming in second. As the singers stood together as the final two on The American Idol season 16 finale, host Ryan Seacrest disclosed on live television that they were a couple.

A fan asked the topic on Reddit’s r/americanidol thread, noting that the two haven’t appeared together in a while. A commenter shared a screenshot of one of Maddie’s Instagram stories, which hints at something she isn’t ready to discuss.

In response to a fan’s question, “Are you happy?” “About 90% of these have been the same question over and over, but I’m not ready to talk about it yet, tbh,” Maddie responds. I’m not mad at you for asking; I understand. I’m sure I owe you anything.”

Are Caleb Lee Hutchinson and Maddie Poppe still together

“However, just one person asked this,” she said of the “Are You Happy?” question. “And I believe this is the most crucial. Yes, I’m overjoyed. Every day, I am pushed out of my comfort zone, which I believe is critical. I’m writing songs that are far too personal for me.

Almost to the point that I’m afraid for people to hear. Of course, there are days when I feel even lower than my lowest low, but ultimately, I know I’m exactly where I’m intended to be. And I haven’t felt this good in a long time.” In other words, during Maddie’s Q&A, supporters repeatedly asked the same question. But Maddie isn’t ready to respond. However, only one fan inquired as to her happiness. She is willing to answer those queries because, sure, she is pleased.

Read more: Who is Mimi Faust Dating? All About Her New Boyfriend

Apart from the speculations, Caleb and Maddie’s music careers are progressing. Caleb released a short horror film, Songs I’ll Never Play Again, at the end of October, coupled with a horror-inspired EP. Maddie released a new song called “Peace of Mind” that finds the singer-songwriter taking her style in a poppier direction.

They met during Hollywood Week. Poppe was in the audience when she heard him perform and instantly fell in love with him. Maddie’s favorite performer that day was Caleb, and she knew she had to include him in her squad for the group round, which she did.

They started dating soon after and hung out every day. With only a few minutes until the winner of the latest season of American Idol was to be announced, the top two contenders stood on stage with the show’s host, Ryan Seacrest. Caleb and Maddie appeared to be no different than any other top two finalists in the show’s 16-year history until Hutchinson disclosed that Poppe was his girlfriend.

Maddie Poppe and Caleb Lee Hutchinson are charming in yet another of American Idol’s most famous pairings to emerge from the same season. The couple is still dating, and Maddie has expressed her desire to marry Caleb. Gabby Barrett and Cade Foehner were also romantically involved, but unlike Poppe and Hutchinson, they didn’t keep it a secret among this year’s top ten contestants.

Are Caleb Lee and Maddie Poppe Not Dating Anymore?

Given how many people end up divorcing or splitting up, it’s difficult to cheer for any couple to stay together. Some, though, are really sweet. If we ever get the chance to see their love bloom, we’d love to invest in them as well. One of those couples is Caleb and Maddie!

Read more: Leonardo Dicaprio Dating: Is There a Relationship Between Gigi Hadid and Leo Dicaprio?

The couple has always kept their followers up to date on what’s going on in their lives, whether professional or personal. It is not always possible to keep things up to date. By any chance, if things aren’t kept up to date, they won’t fall apart. It could be for personal reasons or because of a hectic schedule. 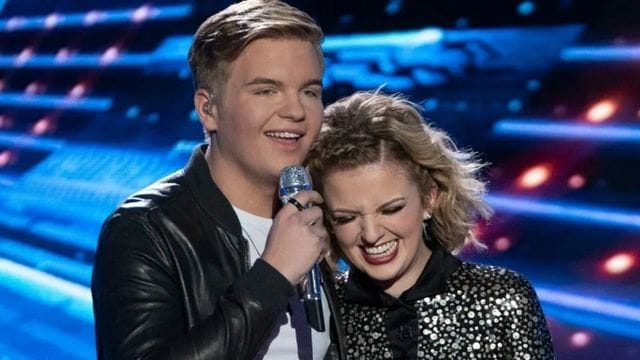 What Are Caleb And Maddie Doing Now

Caleb and Maddie are currently recording and releasing their separate songs and albums. Maddie recently released her song ‘One That Got Away on April 29, 2022. It has gained a large number of listeners in just a few days.

Her long-term partner Caleb, on the other hand, is continuing to rise in the music industry. Their love for each other appears to be formed in heaven!
You can keep up with these celebrities on social media. Caleb and Maddie have 271K and 367K followers on Instagram, respectively. Best wishes to Caleb Lee and Maddie Poppe in their future endeavors. I hope their romance lasts forever. We’re expecting some fantastic news soon.

Are Caleb and Maddie from Idol Together?

Caleb Lee Hutchinson and Maddie Poppe were among the American Idol singers that found not only fame but love. This couple began dating privately while competing against one another in season 16 and remains together to this day.

Iowa native Maddie Poppe is coming to Concert Hall at Prairie High School on Sunday, December 4, 2022, at 7 PM. Opening the show will be the Prairie Choir Singers. Reserved seat tickets are on sale now. Doors open at 6 PM and tickets are $30.00 each plus fees.

Is Caleb from American Idol in Jail?

Ex-‘American Idol’ Star Caleb Kennedy Granted Bond in Fatal Car Crash. The country music singer had been jailed since February on a charge of driving under the influence resulting in the death of 54-year-old Larry Duane Parris.

Caleb Lee Hutchinson and Maddie Poppe met during season 16 of “American Idol”. The singer-songwriter has yet to respond to fans’ questions about their relationship. She told one fan, “I’m not ready to talk about it yet, tbh”. Maddie Poppe and Caleb Lee Hutchinson are one of the most famous pairings to emerge from the same season of ‘Idol’. The couple is still dating, and Maddie has expressed her desire to marry Caleb.

They were featured on ‘The Great Idol Reunion’ on May 2, 2022. Caleb Lee Hutchinson and Maddie Poppe were among the American Idol singers that found not only fame but love. This couple began dating privately while competing against one another in season 16 and remains together to this day. They have 271K and 367K followers on Instagram, respectively.